In my right mind, nothing could have induced me to stand in line for hours to see a fashion designer's work. But, it was hot, and an odd set of circumstances, and it turned out that we got a short-cut in the line and family and friends really wanted to see it so I did view the Alexander McQueen exhibit at the Met when I was in New York last week.

I bailed out about halfway through and played Sudoku on my Blackberry until my companions finished. It was frightening and unsettling and offensive but not just for the reasons it was meant to be all those things. 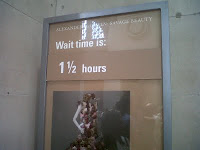 It wasn't "fashion" in the sense of being about what a consumer might draw from in choosing clothing, or even about clothing. It wasn't "art" it was marketing. As we were herded through the spaces filled with sadomasochistic, mysogynist, frivolous, strutting frippery the experience for me played out in the other people who had paid and waited to experience it and the things they said: "I'd wear that." "That's pretty" "I'd love to fit into that." Although a scant few appeared to be taking it in as art and experience I was almost sorrier for them.

Sorry, museum curators, the audience doesn't 'get' the artistic and conceptual goal of that exhibit and you knew it wouldn't. You haven't elevated the topic or posed interesting questions. You've just used celebrity culture and objectification of women's bodies and no ironic eyebrow raises are working here.  It was far more like the Bodies exhibit downtown at the Seaport that I went to last year where they tried to make it about "science" but really it was a tawdry freak show - of questionable origins.

Having done the McQueen exhibit with people whose lives are not steeped in the question of Size Zero, it was interesting to try to talk to them afterward about the fact that the faceless, often headless "bodies" within the "clothes" in the exhibit were - every single one - the exact same 6 foot size prepubescent frame. Bodies were just a (tortured, miserable) inverted cipher, obviously, so why would that matter? Why would it matter that they are all not male? Why would it matter that celebrity designers have an effect on the actual clothes and actual standards of the female body? Perhaps it didn't. Perhaps the nearly uniformly female parade shuffling through that exhibit didn't all get extruded into the gift shop feeling anything personal about their own bodies and space in the world. I doubt it, though. I felt used and discarded, myself, and all the more disgusted for having paid for it and the sheep-like carnival I'd implicitly supported.

I'm sure it reveals me as a rube, as tasteless and clueless, but one of my fathers - an art historian - agreed: he was busy experiencing art at the museum and had no time, literal or figurative, for that exhibit.

In what is not in the least ironic, I also experienced the Brain exhibit at the Museum of Natural History with my other dad. We took apart a brain (plastic) and that was fun. We walked through a snapping, popping hall of synapses and made axons connect by waving our hands over a lighted table.

The contrast between the two experiences could not have been greater.
Email Post