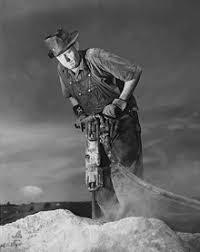 Well, that was interesting.

I was sitting in my living room on my computer (surprise, surprise) and heard my washer start that wham-wham-wham it does when I put too big a blanket in there. But the washer wasn't on.

I realized that it was the furnace - directly below me in the basement - fixing to explode. The whole house was banging and shuddering louder and louder and I fled out the door but still felt the shuddering under my bare feet.

Then I saw my neighbors coming out of their houses all using the universal arm motion meaning "WTF?"

And then it was obvious that it was an earthquake. Funny: the event took less than a minute but the recounting and talking about it went on for a half hour. At first I assumed it was completely local - just our street - but then realized it was much more widespread. Then it took three hours to find everyone in the family - phones were not working, then lines were overloaded, then just not going through.

The dog wasn't bothered, by the way. Followed me out the door at a saunter, went to sit in the sun.