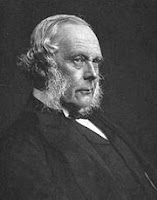 I slept through a lot of science classes in high school, but perked up at least once when I thought I heard my name. I was mistaken, the teacher was talking about another Lister (no relation), the "father of modern antisepsis." Lister and Pasteur and other bright bulbs told people that germs caused infection, and that there was something to be done about it, but they were laughed at and ridiculed. Since "everyone" believed otherwise, and the dead patients weren't complaining, the idea that invisible living things were growing and destroying tissue was considered absurd.
For a while.
Eating disorders, it seems to me, are undergoing a classic paradigm shift. Meanwhile, when you say anorexia and bulimia are brain disorders and weight restoration treats the thoughts and behaviors people look at me as if I'm sadly mistaken and a little bit dangerous.
"When enough significant anomalies have accrued against a current paradigm, the scientific discipline is thrown into a state of crisis ... During this crisis, new ideas, perhaps ones previously discarded, are tried. Eventually a new paradigm is formed, which gains its own new followers, and an intellectual "battle" takes place between the followers of the new paradigm and the hold-outs of the old paradigm."
Unfortunately for those of us impatient (and inpatient) for change NOW, I fear Kuhn, channeling Planck, is probably right: "a new scientific truth does not triumph by convincing its opponents and making them see the light, but rather because its opponents eventually die, and a new generation grows up that is familiar with it."
Food is medicine in eating disorder treatment. The world is round. The earth orbits the sun. Germs cause infection. And it matters.
Email Post