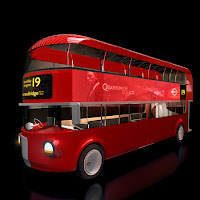 But it is increasingly difficult to discuss eating disorders without addressing the bus going in the other direction: our society's fatuous and self-satisfied pitchfork-waving crusade against "obesity." And the smug lip-smacking focus on "Childhood Obesity."

In the eating disorder world people like to stay on the fence on this topic, promising recovering patients "we won't let you get fat" and settling for the lower side of target weight ranges because patients won't "tolerate" anything more. We say "you're not fat" in some sort of reassurance as if actually BEING fat was indeed a fate worse than anorexia.

The bus is moving too fast and it is too big and I have enough to do just getting attention to the brain disorders on my plate here, but for those parents who are working to sort this issue out - and if you have a kid with a restrictive eating disorder no doubt you do have to figure out what side of the road to walk on to keep from being run over - may I point you to a lovely (though perhaps more the size of a moped than a bus) movement toward rational thought on the topic.

Four big, fat myths - Telegraph
Death by 'fairy cake' uproar
Rethinking Thin - Gina Kolata
Health at Every Size: The Surprising Truth about Your Weight
Lessons from the Fat-o-sphere
And a shout out to Obesity Myths: Bias and Bologna by Dr. Shepphird for a wonderful overview of the issue.