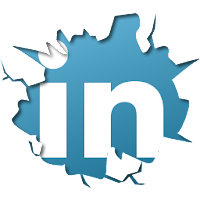 I have been shut down, harassed, flamed, condescended to, and criticized on the Internet before. If you put yourself out there and say anything real you have to expect this. When this happens, I have to  believe that if I remain reasonable and I'm confident on the facts that those observing the interaction will at least know that even if they don't leap to my defense. I'm an adult, and I can take care of myself.

But sometimes I wonder if people really know what goes on.

Right now, a forum that advertises itself to be for eating disorder clinicians and researchers on LinkedIn has become a safe place to be unprofessional and I think that is not good for the eating disorders field. I'm pretty sure that the conversation going on there is not being widely seen as it started quite benignly with one of my posts praising a recent news article. I would not add more eyes, or flame, to that fire except that the moderator for the forum is disparaging F.E.A.S.T. in a way that will live on and really needs to be clarified. Our Executive Director and others have corresponded with the moderator but have been rebuffed.

I don't believe that in 2013 it should be unremarkable on a forum for ED professionals with 1900 members to say that the current science on eating disorders can be dismissed, that psychoanalysis is an appropriate treatment for children with eating disorders, and that adoption is at the root of eating disorder symptoms in a child you've never met. I said so, politely, and I am now the target of ugly and untrue accusations.

It is also safe on that forum to accuse a user of breaking rules of the forum that don't exist, violating a "sacred space," and you may be praised by the moderator for insulting another member. We so need professionalism in this field. I have been told I am not a professional and shouldn't be in the group, and others are not being allowed in the group now (this was not true until this controversy, BTW). I have left the group, myself: I don't know what "professional" means but this isn't it.

I have seen this pattern over and over and it still perplexes me. I know what it is: cognitive dissonance and the fiery end to some really bad paradigms. But I wonder what would happen if the public knew and professionals of goodwill felt "safe" to speak up against it. A few do now, and I celebrate them. Most are too afraid.

The forum administrator has accused me of sharing posts outside the site, not aware herself that her group is public. She acknowledged this yesterday but with no apology for her wrongly accusing me of misconduct. Well, the site is public and LinkedIn's rules are clear about sharing and linking to the site.

Judge for yourself. And if you are a member and make a comment or write to the administrator please keep in mind that we are all on the same side (of eating disorder patient recovery) and that civility is SO important. I don't expect to "win" in a situation like this. But I continue to hope that the eating disorder field will do a better job of self-regulation. I'm weary of being told "don't give it attention." That attitude just leads to more harassment. It should not be all right to harass people in this way, or to call it "professional" to mischaracterize an organization that is working to help patients and the field.
Email Post