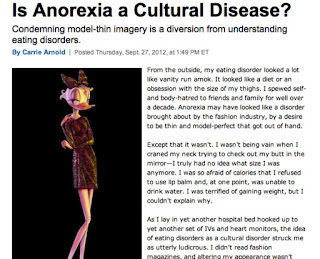 Carrie Arnold's piece in Slate does something all too rare in eating disorders writing: she's reasonable. Reason and reasonable are rare real estate in ED literature and she is about to be the major landowner as her third book comes out.

It's hard to be reasonable about anorexia. People are so exercised (ahem) about their little corner of belief. I plead guilty on that myself. We are at pains to be heard on OUR point, to beat down THAT other point, that no one loses.

At the same time, she takes on some tough stuff here. It's a bit heretical not to go with the popular flow on culture causing EDs. But someone needs to speak up without falling into the nature OR nurture trap. It is reasonable to acknowledge culture in eating disorders, but to put it in context at the same time: a diversion from the larger picture. I'm so grateful to her for this, and for this article.
Email Post