(note: I wrote this while on my recent trip to Australia, but was unable at the time to post) 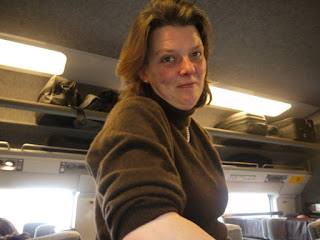 Squee. That's what she would say. That's what she IS saying, in my head. That's the price of having a dear dead friend with a terribly strong voice is that she still talks to you, even when what you want rather miserably much is for her to hear you because Charlotte would very much have wanted to follow me on my trip to Australia where we both have so many dear shared friends.

Today at a picnic she was the one we toasted. Not because she is gone but because she is so very present. Not because we miss her so much as that she is with us. It's just annoyingly one-sided. We hear her loudly and clearly. She continues to hold us to account and not let us get too full of ourselves.

In short, Charlotte Bevan is still having a laugh at our expense and as a result we are still laughing at ourselves.

She would love that her friends met at Kings Park for a picnic and a Kookaburra swooped in to take a bit of bread. She would love that we sat and schemed for helping families over a good meal watching ducks and children around a pond. She would know or want to know every one of us around the circle, and because she was Charlotte everyone there knows her.

I suppose that won't always be true, but it will always be some part of any group of parents around the world into the future because she changed the world, whether people continue to know why or not. There was a terribly important person who personally helped countless people and the ripples of that will not end.

She's not alone. She was singular, our Charlotte, but not alone. I have known countless parents who have paid it forward over the past many years, and each has played a role. No one will remember them all but I have the honor to have known so many. It is times like this trip where it hits me the strongest. Someone approaches me a stranger but we are not, they simply reveal themselves as part of this web, this community over time. I have been a named person over time but I am really only that. This is a movement, a society of people who don't all know one another but their networks connect to one another and we are all part of that whole. Most have contributed and moved on, leaving a legacy without a name attached, and one significant one has permanently been taken, but it's bigger than any of us. What is it? It's a society of parents and patients and siblings and professionals who are moving the conversation forward. It is a cohort bringing new paradigms to life.

Charlotte you would be so proud. Charlotte we are proud on your behalf and in your name. Charlotte, I am in Australia visiting our friends. Charlotte you really are here.
Email Post