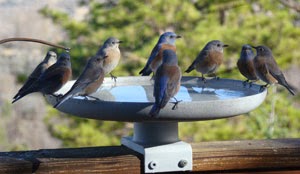 A new Twitter Army has formed for ED advocacy. And a trail of newcomers are tiptoeing in...

A parent activist, after a trail of other successful campaigns, was able to get a sunglasses designer to change the obnoxious name of their product and then be featured in a media story about "How Companies are Listening (and Changing) Because of Your Tweets."

This activist, Jennifer Ouellette, has achieved some pretty extraordinary things from her keyboard, including:


Yet perhaps the greatest accomplishment has been her convincing a growing army of parents in the ED community to tiptoe into the waters of social media, especially Twitter, by showing them they are both needed and missed. She has noticed, as have I, that Twitter does not come easily to people our age who are not already "into" this sort of thing. So when Jennifer not only demonstrates the power of social media but patiently translates Twitter into English for this emerging army she is demonstrating a leadership that brings change.

It matters, too. Twitter is a way, especially with numbers of like-minded folks, to actually affect companies and organizations and policy. It's free, it's actually quite easy, and it works.

Now, what she's doing -- in her real name  -- isn't all unicorns and compliments. If you've had your coffee and are wearing asbestos underthings go ahead and venture into the comments section of the media story above. Note the savage and unthinking commentary. Now note the fact that so few people have commented to the contrary and this: note the "thumbs up" and "thumbs down" on each comment. We have thumbs, too, my friends.

I expect trolls and miscreants. That's the internet, and that is the dark underside of anonymous commentary. What I don't understand is why more families and advocates don't think they are needed to provide at least some ballast for calm good sense. No, we can't fight every battle and it may seem like "stooping" to the level of the mud-slingers. But silence is LOUD, and leaving fellow advocates out on a limb where they have so courageously and charmingly gone out FOR US, well, don't.

I've spent a decade speaking up. Most of the time I have felt isolated and frustrated because most of the response, while supportive and kind, was private and there was little joining in. I've gone out on many limbs because I felt it was important and hoped and waited for others to just hit the "like" button so the haters out there would know that I was not a lone nut.

It is a joy and an honor to get out on those limbs under Jennifer, to be part of the Twitter Army that she's building. It takes a critical mass to make a difference and I feel that building and my armor is on. Let's be that force "to be reckoned with" that is needed on many fronts.

You are needed. Click here for more info on Jennifer's work. Or, check out her tweets and join in!