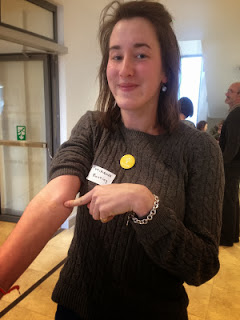 This was quite a week over at Charlotte's Helix. If you haven't been following it, make sure to bookmark or subscribe to the Helix blog.

For one thing, Kings College London signed on to do the DNA collection side of the project. This is big. Really big!

But this is huge: they started taking collections the day after it was announced. The kind folks putting on the National Carers Conference for Eating Disorders at the Maudsley hospital (yes, THAT hospital) were kind enough to not only put the Helix project on the stage but also to facilitate a first blood draw: from Charlotte's dear friend Miranda B., the blogger and mental health activist.

I am so glad. It has been a very difficult week for Charlotte Bevan. She had a terrible infection, bad reaction to antibiotics, and dreadful pain. She was hospitalized, which she hates, and then moved hospitals, where she is awaiting surgery.

We are all hoping that the knowledge that Charlotte's Helix is collecting DNA is a warm spot in a tough time.

A presentation that Charlotte was scheduled to give at the Carer's conference was delivered by her partners in the project, Erica Husain and Fiona Bromelow. Her name and her work were a big part of the day, I hear.

And this: the book that Charlotte and I have been writing was published. Sort of. An early version is available for sale. The final version will be available soon. Email for link. All proceeds go to the Helix.

So, this week Charlotte became a published author, delivered an important message at a conference, and had her dream of Charlotte's Helix come true.
Email Post