Slutwalk - there, I said it without quote marks

I was startled the first time I heard the term "slutwalk." I'm easily embarassed by profanity and wildly uncomfortable with the word "slut." See: I had to use quotes around it to dissociate myself from using it. 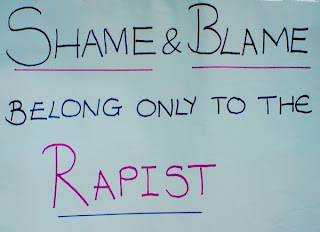 But Slutwalk is in the proud tradition of other words I can't make myself use like those that start with "N" and "Q" and "F" diffusing the power of an epithet by repeating it endlessly and refusing to be victimized by its use by those who mean to harm. In case you have not yet heard about this, it follows a revolting public statement by a Canadian policeman about how to avoid rape - not dressing like a "slut." As most reasonable people know, rape is not an act of helpless lust induced by the sight of willing women. Rape is an act of aggression and dominance little related to the victim and everything to do with the predator.

Much to my surprise, a day or two after I first heard the term I learned a blogger friend has actually attended a Slutwalk, and describes it.  I'm grateful to her for her post, and her newspaper interview - these are important things for us to bring into the light. I used to work at the Everywoman Center at UMASS, where I answered the rape/crisis hotline. I have known too many women who survived rape or assault - and suffered in various degrees from the experience. We cannot lift all the pain and effects of that but one thing we can do is hear this: "shame and blame belong only to the rapist."
Email Post
Labels: blame the victim rape slutwalk victimization