Backward and in heels

There's a delightful snarkiness in saying that Ginger Rogers did everything Fred did, but backwards and in heels.**

But I've learned something interesting. It is actually easier to tap backwards and in heels. At least for me.

The backwards thing because it is like falling - far easier to fall back than forward, right?

The heels thing I've just learned because I rewarded myself with my first pair of heeled taps for the new year. I adore them. I thought it would be hard to adjust and harder to dance but no, sir: it's a delight. Perhaps because I'm already up on the balls of my feet, or because the smaller heel tap balances better. I don't know. 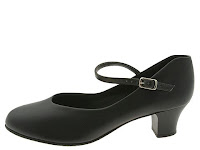 Sad to say, I'm going backward in terms of tap fashion. Women aren't wearing heels as much, except in Rockette style dancing, which interests me not at all. I'm actually far more interested in rhythm tap than broadway, and of the little pictures I cut out of dancers to tape on my wall most are actually men.

But I like heels, and I have always envisioned getting to the point of tapping in heels and I'm just loving it. Who says you can't keep growing up, even at 49? I'm just getting started!

**attributed to a number of sources but probably from an old cartoon.
Email Post