I left my shoe on Bourbon Street

Woke up in my own bed this morning: quiet, but strangely disorienting. Many thoughts germinated on this trip, intellectual and strategic. OK, and some absinthe and dancing and beignets and beads as well. It *was* New Orleans. 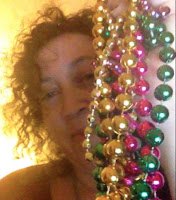 The Society for Adolescent Health and Medicine members are a select group, I find. There were many ED specialists there that I've known a while, but a number who until now I hadn't had much time to chat with and learn about. Here's what impressed me most: the quality of expertise. This wasn't a crowd of people who were dithering over whether or what "evidence-based" is. They weren't caught up in idiotic in-fighting about particular words or modalities because they actually understand what they mean and can get on with the how and when and let's share ideas on new innovations.

The quality of the presentations reflected that, as did the questions - which were real questions and not just speeches and self-promotion in the form of a question. The hallway conversations led to at least three new initiatives for F.E.A.S.T. and two meetings ended up moving projects forward in a way that a month of email and phone meetings would never have.


MB Krohel, my friend, social director, catering and networking wizard, dowser of the right person for each job, and head of the F.E.A.S.T. Medical Education Task Force, is a FORCE to be reckoned with. She earns her reputation for getting things done just as she does her Mardi Gras beads: with focus and integrity. And she knows how to party.

I continue to learn from Rod McClymont of Bathurst, or "He Who Knows Everyone" who can always be found surrounded by other clever people - in this case an international and spicy melange perfect for New Orleans.

Glad to catch up with Ellen Rome, Debra Katzman, Walt "I'll do anything for beads" Kaye, Richard "ready for St. Patrick's day" Kriepe, Laura "noisy brain" Hill, and ever in passing Rebecka Peebles.

Now, I lost a shoe and at least an hour's worth of memory on Bourbon Street, so - you know who you are - if you find them just leave them as a token of my affection.

Food, music, friends, good science, and an optimistic view to the future of eating disorder care: that's a week worth having. But I need a nap.
Email Post