You can read the F.E.A.S.T. blog for the official news on the AAP trip, but I'll add some personal notes here. 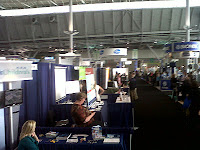 One, to say that the Medical Education Task Force at F.E.A.S.T. did an outstanding job in preparing for the trip and the display. MB Krohel's organization and team were wonderful: including MEDA's Kristen Tyman and Task Force member Raye-Ann de Regnier on site.

As you might expect in these strange times, a Pediatrics conference was saturated with talk about obesity obesity obesity. One of the saddest things we saw was a artwork competition for kids on the topic of "Healthy Kids" which nearly all the children depicted as about food in some way, often depicting bad foods and good foods and no other aspect of health. Some also added in exercise. A scant few included other aspects of health: like studying and music and sleep. Only one that I saw mentioned safety (helmets), smoking, and drugs. One had a family meal: one. The overwhelming theme was that health equalled healthy food, period. Healthy food was fruit and vegetables, pretty much. Some of the imagery of obesity and junk food was genuinely disturbing. 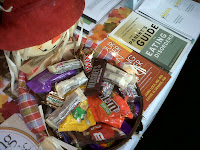 So, in that atmousphere, it was small wonder that our banner and booklets titled "EATING DISORDERS" got a reaction. Most of the response was "thank you! important problem!" Though most of them seemed to be talking about obesity AS an eating disorder which, read my lips carefully, it is not. (Binge Eating Disorder is, but that is not a weight condition, and not all obese people have an eating disorder, and not all BED patients are obese. Just saying.)

Two other reactions gave us pause. One was the degree to which people walking by personalized the issue. I had at least four people ask me if I was giving the booklet to them because they looked like they had an eating disorder! At an event with exhibitors giving information on everything from chlamydia to leukemia why would the topic of eating disorders be seen as about the doctor walking by? 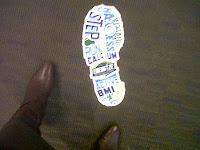 The other dynamic had to do with the fall-themed baskets of candy on our table. Some people drifted over with delight, but also apologies as they took little "fun" sized Snickers and Three Musketeer bars and other yummies. Others were openly shocked and questioned us on this "unhealthy" and "ironic" offering when here we were talking about eating disorders. One woman LITERALLY turned on her heel and reprimanded us as she walked away in disgust. (For which I was grateful as it embodied the more subtle but no less disdainful responses of other people) That DOCTORS treating children are so conflicted about and slightly phobic about small candies - even saying aloud that they were going to get "fat" from them - bodes ill for their calm guidance for families and children.

As MB Krohel wisely reflected, "We have a society full of guilt and fear around food." This makes it all the more important that we could be there - the only ones talking about the topic of eating disorders - to offer a calmer view.
Email Post
Labels: AAP Academy of Eating Disorders bmi boston childhood obesity pediatrician