If Barbie Were Real 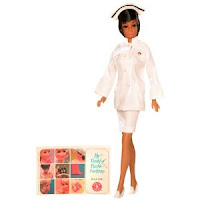 If Barbie Were Real, I think she'd say "please stop playing with me for your ideological games."

If Barbie were real, she'd be two years older than me, and pretty tired of being bashed by feminists for decades. That prodigious bosom would be far lower and her outrageously long legs quite possibly the recipients of new knees. Being a woman of a certain age, she'd be pretty philosophical about being admired and used and loved and hated and imbued with so much power over others.

Including the power to cause people to lose their minds: " 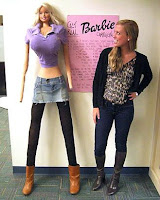 Back when Barbie and I were kids, we did a lot of dress-up and dreamed of being princesses and nurses and hot librarians. Then we grew up and got jobs and kids and therapy. We got clued in to the politics of our bodies, and although we couldn't change our bodies we decided to accept them. Even when we are six feet tall and have ginormous breasts and serious foot arch issues. We realized that no matter how people admire us it won't really make them crazy. No matter how much envy we have for others, life goes on. It doesn't define us. If mental illness was a matter of the world being so awful to us, holding unreasonable standards for us, dangling the unreachable before us - well then it would be even more common and less treatable. But it's not. Anorexia is a mental illness, not: too many envious thoughts, seeing too many pretty people or thin people or rich people or ones with better clothes. Barbie doesn't hold out an unrealistic ideal. She's a doll. No one became catatonic from Pet Rocks, or had snout implants because of Miss Piggy.

I know I'm not the only one hanging my head over people thinking that aspiring to Barbie proportions, or that negative body image itself, causes eating disorders. But I do know that I'm going up the down staircase on it. So, I've decided to enjoy the exercise.
Email Post