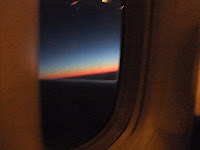 I left Virginia in the evening of March 9th, and flew overnight to London to attend the EDIC conference. I had the good fortune of an empty seat beside me so I could attempt to sleep, but wasn’t terribly successful despite two different types of travel pillows. The attendants woke us for coffee just in time for me to see Ireland at dawn, and for that I was grateful.

I took a picture of dawn over the wing. 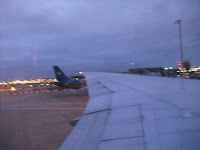 Then I took a picture of BMI Airlines, just because it cracked me up. You can’t see the letters, but it seemed like a perfect greeting card for a punchy ED activist.

Sleepwalked through immigration and got my luggage and my first chance to be called “love” of the morning before I descended to the Tube stop and my first on-the-ground view of London. Although I was a travel agent for seven years and circled the globe and travelled a great deal for some reason I’d only changed planes in London and never stopped. I enjoyed the commuters, and then coming out of the station and to my hotel just in time to see parents walking /biking/ scootering their kids to school.

The hotel didn’t have any rooms yet, so I turned in my bags and walked the neighborhood of Kensington. Checked out the venue for the conference, got a snack, walked in a grocery, window shopped, eavesdropped, tried to get into a library, and of course blogged.

This was my first trip in years without my laptop, and I’m glad I left it behind. With my Blackberry to let me know what I was missing (too cumbersome to actually read all five email accounts or check the ATDT forum) I was able to cope. For the whole week there were only three really urgent messages and my thumbs were able to handle them.

After a nap and organizing myself I went downstairs to meet my friend, Chris Berka, who is also our Board Chair – he had just arrived. We caught a cab and went…

To the Maudsley Hospital. Anyone who knows me or the course of my life these past seven years will get why that was both important and poetic. I’ve said the word “Maudsley” at least once a day for years – usually quite a few times. I’ve consciously and doggedly tried to make “Maudsley” a searchable term on the Internet to bring parents to evidence-based information about eating disorders (“family based therapy” is not a google-friendly term). I’ve had the word used against me, I’ve been used against the word, but I’ve never been TO the Maudsley. Now, I know the hospital doesn’t offer what I and others call “the Maudsley Approach” and in fact the clinicians there chafe at the way I and others use that word. We knew our friends who work there wouldn’t be there to greet us and that there was no actual office at the hospital to lay a wreath on, and I know that my friend Fiona has a different reaction to that word than I do. But really, what did you expect me to do when I get to London? Doesn’t everyone visit a psych hospital when travelling? 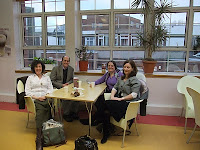 I was delighted that my friends Chris and Fiona and Rachel wanted to make this pilgrimage with me, as psychiatric tourism is a rather odd way to spend an afternoon, but I’m grateful. We were admitted to the building and had advance permission to get something to eat at the cafeteria. I took pictures and even a video. The English had tea and the Americans coffee but that was the end of any international disagreement.

The four of us had the most wonderful and relaxed conversation. It was, one of us said later, “an inspired idea” and “time kind of suspended itself for a bit, just for us.”

Of course, the fact that I was meeting my good friend, Fiona, after all these years was both surreal and completely natural to do so there of all places. Meeting Rachel in person topped the experience beyond my hopes. 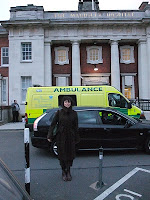 In case you wonder what it looked like inside and out, I took a video clip!
(see below)

We’d hatched a plan to walk from the Maudsley back to the hotel so I could see a bit of London on foot but we were having too good a time and ended up getting the hospital to call us a cab. And no, it was not the vehicle behind me in the picture!

At the hotel we found F.E.A.S.T. friends waiting for us: EB, Erika, Lynne, June Alexander, Pat, and Brian. We sat down to a very jolly supper, joined at the end by Susan Ringwood who looked remarkably calm for the host of 525 people in the morning! As tired as I was, that was a wonderful meal. As usual, I have a picture of the table. 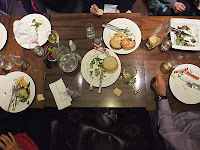 Why does Laura take muddy pictures of tables and no people? Because I don’t like to put people on the spot about having their pictures on my blog. Privacy is an important issue in the eating disorder world, and I like to honor that. Plus, what could be more appropriate than a table surrounded by diners and friendly talk?

Oh, and in answer to those who were not there but were curious for some reason, I drink Guinness. For the iron, of course.

Speaking of nutrients, EB brought AMAZING F.E.A.S.T. cookies! With “FEAST-ED.org” and “Magic Plate” on them. I hoarded some to bring home for my family and kept a few to keep forever. 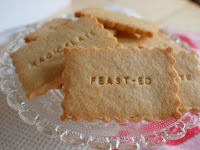 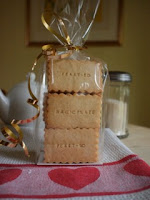 June caught me enjoying my shortbread! Blame the Guinness and jetlag for the glazed eyes.

I did not like saying goodbye to everyone that night, having only just got to meet them. Some had come only for the dinner and not the conference, and I am so SO grateful for the opportunity to have that time with them. Thank you EB, and Erika, and Lynne, for being there and for talking of many things and not just eating disorders: among them graphic design, graduate school, and cookie cutters!

I slept SO WELL that night.

The professional conference was held all day Thursday and Friday, with a National Family Network Day on Saturday. Dinners were on our own: a fun opportunity to spend time with other attendees, or “delegates.” I was pleased to enjoy curry, sushi, and fish and chips along the way. I drank a pint, well – the better part of two half pints – at a Pub. I got into philosophical conversations with people I agreed with and some I did not. I got a pocketbook full of business cards and literature and will be working through them for weeks. It was a wonderful networking opportunity.

I met a range of fascinating professionals. A forward-thinking Norwegian and a skeptical Greek. Two people from a residential treatment center with whom I shared much in common and two from another one with whom it was a struggle to find common ground or vocabulary. I became enraged by talk of one approach to care, and encouraged by talk of another. I met a few legends – that was intimidating. (I also met a Sir, and surprisingly that was not.)

I also met some wonderful parents. Charlotte was there to greet me on Saturday morning and that was a thrill – she was a valued member of the F.E.A.S.T. team throughout the day. I met a parent from the forum who I didn’t know would be there and a friend of hers that I hope will be joining us. I met a new F.E.A.S.T. member couple who deserved some encouragement in the middle of a very tough time – and got it by the bucketful from the other parents at the table. Plus many others. Fiona and Chris and I split up to cover more ground, see more presentations, meet more people. 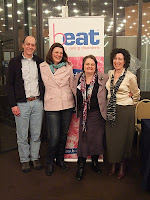 High points: Eisler and Simic’s 2-part seminar called “Families Around the Table.” Cindy B’s catwalk lesson (see below). Professor Glenn Waller’s unsuccessful attempt to be disagreeable. Some very brave parents and a young clinician who spoke up at Question Time. Translational research. My friend, Gary. The students presenting their first papers. The nurse who had to stop us from telling him any more about the psychological power of weight restoration because he was worried he’d have to quit his job as a heretic.

It would not be a complete account if I did not make some observations of a less cheery nature.

It concerns me that the standard for hospitalization in the NHS is a BMI of 14.

It distressed me that a presentation demonizing parents – complete with pornographic illustration – went unremarked.

It appalls me to hear talk of palliative care in patients with a treatable illness – some with parents sitting by helplessly wanting to intervene. These patients, I have to say, are honored in the delusions of their brain state but not in their humanity. It is inhumane to let a mental illness dictate care because we lack the will to act “too aggressively.” This squeamishness about “forcing” people to accept care is palliative for the eating disorder and perhaps for some clinicians, but I doubt any parent not already repeatedly cast away in the process would agree that “listening to the patient” is preferable to something temporarily forceful. The recovered people who were once given up on would not agree. My perspective as a parent surely biases my view but exactly whose bias, really, should we listen to? ED?

My impression of the UK’s eating disorder treatment environment is that it is different than ours in the US on a few dimensions. I see a greater interest in evidence-based practice in the UK, for example, despite limited access to care. I heard very little about the kinds of non-evidence based treatments and tools that are so common in the US. I heard less about cause at this conference – and far less about blame, and that makes sense. I noticed that participants had their geographic location but not their affiliation on their nametags and in their own introductions. It was harder to start a conversation with a stranger, but a bit more substantive when we did.

I won’t get into the particulars of how I think having a national health system changes the way families seek and respond to care – for fear of starting a political discussion. Yet I do have to note that it does change things a great deal and not always in obvious ways.

I had a delightful moment right before I left for the airport on Sunday. I got to meet my 12-year old son’s dear cyber-friend in person. Even though I had seen her on Skype and my son and this young lady have been friends for years online it was still very exciting to meet her in person and her delightful mum. The fact is, this trip was all about how the Internet has made it possible to make friends and connections with real people around the world. I won’t share THAT photo, but I will tell you that I was smiling.

Thank you to all the F.E.A.S.T. parents who made this trip happen, to Susan Ringwood for encouraging us to submit an abstract, for the families who came together in person, to my husband for holding down the homework fort, for the Mod Squad on the ATDT forum who kept things from getting out of hand despite a wave of new visitors, for the cool t-shirt vendor at the airport, the “loves” and the “dears.”


BELOW: Catwalk technique, and the Maudsley in and out.