The light reflects back 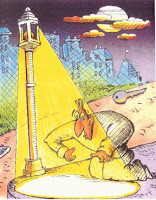 I don't object to researchers studying parents and parent characteristics. I don't object to examining family dynamics and functioning - hey, if you've got the funding, knock yourself out.
But every researcher who studies stuff like this:

Depressive tendencies and lower levels of self-sacrifice in mothers, and selflessness in their anorexic daughters.

Randomized control trial of the medication Quetiapine, in which they will receive either the study medication or a placebo. In addition, they are offering several months of family therapy treatment for families with adolescents between the ages of 12 and 18 at no cost.

And frankly, it all reminds me of the story of the drunken man who was searching for his keys under a streetlight even though he'd lost them somewhere else: "because the light is better."

If you keep searching into family pathology (a dead horse, but rich with potential since families share genetic personality traits and grow quite strange under the strain of a member's illness), you are choosing to continue the legacy of blaming parents and thereby setting them adrift from the families their illness also wants to destroy.

There is plenty to learn about eating disorders. But first you have to decide where to shine the light. And that decision sheds some light on you.